3 Reasons to Use Thread Rolling for your Next Project

Each with its unique characteristics and capabilities, both threading processes are credited for creating the highest produced machine element every year.

Thread rolling is different than cutting, grinding, and chasing in that it does not remove any metal, but instead uses steel dies to displace and mold the metals.

Manufacturers for different industries have their own preferences about which method best suits their needs. However, recently there has been a growing interest in thread rolling, as opposed to traditional thread cutting, for more reasons than one. 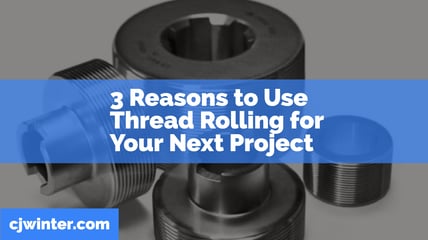 Unaware as to why your next application should be thread rolled?  We've got you covered with the three essential factors to consider for your next thread rolling project:

It lowers overall cost. Since the material is simply being displaced and molded, waste material is reduced and proves to be a major cost benefit.

With shorter labor times comes a decrease in cost of creating these screw threads. Thread rolling allows for a greater quantity produced per roll and lower tooling costs per thread.

As a result, if a manufacturer were to opt for thread rolling, there would be a noticeable reduction in costs associated with the labor and process.

One reason why labor times are shortened is the fact that there is no waste material and clean-up times are minimized.

Furthermore, rolled surface feeds per minute are ten times faster than cutting and require only one pass. Thread rolling tools, therefore, have a more rapid speed of operation - delivering precise results with a decrease in labor requirements.

The accuracy of the thread form is a result of the precise geometry of roller dies used during the process. Thread rolling also results in a surface finish of 32 micro-inches or less; whereas, cut threads are rarely less than 63 micro-inches.

The improved and smoothened surface finishes are caused by intense applied pressure during the thread rolling process while maintaining the accuracy of the initial setup.

Of course, even thread rolling has specific material requirements. Metals suitable for thread rolling need to have an elongation factor of at least 12%, indicating a material can be plastically deformed.

A material such as cast iron is too brittle for the thread rolling process and does not have the necessary physical properties to be hardened and compressed.

Thread rolling is an ideal solution for improving wear and fatigue resistance while enhancing shear, tensile, and yield strength, and can also aid in the production cycle by becoming the fastest operational segment with optimal results.

Lib has been with the Brinkman International Group, Inc. for the last 30 years. Currently the Director of Global Sales, Lib has held numerous positions in Engineering, Operations, Sales and Product Management with CJWinter and its manufacturing divisions. Lib is a member and has served on governing boards for the Society of Automotive Engineers, The American Society of Mechanical Engineers, and Precision Machine Products Association.

© 2021 CJWinter is a registered trademark of Brinkman Products, Inc.  Website by ThomasNet RPM

Connect with an expert!

Connect with an expert!

We’ll be in touch shortly!