An Introduction to Thread Rolling

Thread rolling is a cold forming or cold metal forming process that creates threads using precision thread rolling dies that are the mirror image of the thread being produced. This process is different from other processes like metal cutting, grinding, and chasing because it does not remove any metal to create the desired profile. Instead, these hardened steel thread rolls move and mold ductile metals quickly and very precisely into desired thread form.

One particular difference between cut and rolled threads is the top of the thread crest.In the roll threading operation, the material is pushed up into the root of the thread die. The material on the outer edges of the thread elongates faster than the center of the thread.As the material meets the die root, the outer edges curl inward, forming the crest. The center of the crest has a slight concavity as shown in Fig 1 - which is a normal feature. This concavity is part of the clearance interface between mating threads and does not affect the fit or function of the threaded joint. The presence of this feature at the crest of the thread is one way to visually confirm that the thread is in fact the product of thread rolling rather than cutting, as cut threads lack this characteristic. Further forming will cause the 2 sides to overlap and possibly overfill the die.

Many manufacturers prefer thread rolling to traditional thread cutting because the process of rolling strengthens the thread profile, as opposed to disrupting the natural structural integrity of a material by cutting into it. Rolling elongates the grains by allowing it to flow in more than one direction following the contour of the fastener. This also results in compressive stresses at the root of the thread. The new contoured grain arrangement results in a significant increase in the strength of the produced thread.

For the same reason, rolled threads are often much smoother, and damage resistant during handling than cut threads. Thread rolling changes the mechanical properties of the material by work hardening it, resulting in increased wear and fatigue resistance, as well as enhanced shear, tensile, and yield strength. However, this lowers ductility of the threads, giving rolled threads an increased resistance to stripping under heavy stresses – an advantage over cut threads. Cut threads have a grain flow pattern that remains parallel to the part axis, weakening the thread strength in the longitudinal axis. The thread will typically fail at grain boundaries, which tend to be weaker than the grain itself. With rolled threads, the grain flows in a transverse direction, providing resistance to failure where these forces are being exerted across the grain.

Thread rolling also improves fatigue resistance. The rolling process increases the cold work and “burnishes” roots and flanks. This improves the surface finish as well and produces a more consistent thread form. Surface imperfections that result from thread cutting can become the imitation points for fatigue failure. Working with fine grain materials is another way to further increase the fatigue resistance of the threaded area. The finer the grain, the better the fatigue resistance, but this material quality is one that generally needs to specified, as mills make both fine and coarse grained materials.

Because the surface layers of the rolled thread, particularly those in the roots, are under compressive stress, tightening and other forces must overcome these compressive stresses before the tensile stresses that cause failure build up. This is how thread rolling improves a thread’s capacity to resist these fatigue stresses. See Figure 2 for more details. 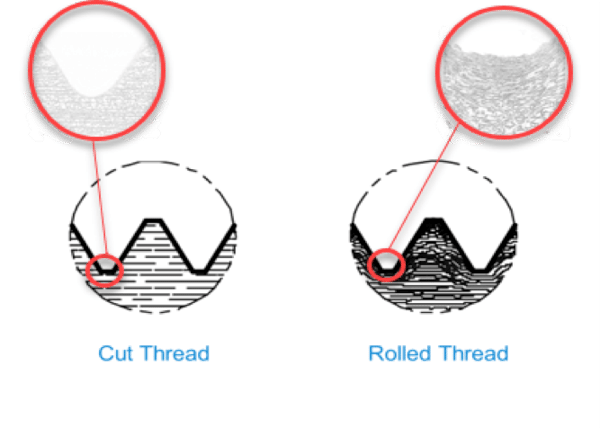 Figure 2: Cut thread showing how the natural structural integrity of a material is disrupted by cutting into it – essentially weakening the thread. The rolled thread is a result of compressing the grains at the root of the thread. This new contoured grain arrangement results in significantly increased strength of the produced thread, but also improves finish, form geometry, and fatigue resistance.

The material being rolled needs to have some ductility and generally cannot be rolled in the hardened state. Materials used in the machining industry are provided in a cold finished condition. It is either cold drawn or extruded to a bar or is turned and/or ground. Materials that are cold drawn have used up some of the ductility of the material. The amount of cold work is generally minimal, but can limit the amount of forming. Still, these are in a favorable condition for roll threading. Even stainless grades in the strain hardened condition can be thread rolled, due to the higher ductility ratings of stainless. Turned materials generally have higher ductility values. This is usually hot rolled material that was turned. This material has not gone through any cold work operations that can reduce ductility.

Ductility can also be affected by the grain size of the material. Materials with smaller or finer grains, ASTM 5 or finer, will provide an increased level of ductility versus a coarse grain material.

As with thread rolling, materials during cold work will have some sort of diameter recovery after the forming operation. Carbon and alloy grades, with carbon levels above about 0.3% will yield different recovery effects. A 1045 with a 0.43% carbon will have a different spring back than a 0.50% carbon. If a machine is set up for a fixed pre-roll diameter, one must look at the chemistry of the incoming material and make adjustments to compensate for the spring back.

Stainless steels are susceptible to work hardening, much more than carbon and alloy grades. Forming threads need to be formed quickly with little dwell. If the die were to dwell on the material for longer than 2 to 3 revolutions, work hardening will increase and the formation of slivers can occur.

Thread rolling stock is smaller in diameter than full size cutting stock, without any of the wasted material. This means no scrap from routine processing. Thread rolling surface feeds per minute are up to 10 times faster than single point thread cutting. Thread cutting requires an average of 10 passes, compared to just 1 pass needed for rolling. This means significantly reduced costs per thread due to the higher quantity produced per roll set.

No scrap, lower labor, lower tool cost per thread produced- this is a formula that delivers reduced costs.

Cold working increases tensile strength at least 30% more than cut threads, which increases the strength of the thread. Additionally rolled threads improve fatigue strength by 50% to 75%. Threads show no loss of fatigue strength, even when heated up to 500° Fahrenheit for several hours. Stronger threads without the need for expensive outside heat treating are a direct result of choosing a rolled thread over a cut thread process.

Thank you to Bob Drab from Corey Steel Company and Miles Free from Precision Machine Products Association for review of manuscripts.

Lib has been with the Brinkman International Group, Inc. for the last 30 years. Currently the Director of Global Sales, Lib has held numerous positions in Engineering, Operations, Sales and Product Management with CJWinter and its manufacturing divisions. Lib is a member and has served on governing boards for the Society of Automotive Engineers, The American Society of Mechanical Engineers, and Precision Machine Products Association.