More manufacturers in the automotive, fastener, plumbing, aerospace and other industries are choosing thread rolling over the traditional thread cutting process.

Why? The obvious advantages are higher quality and stronger threads. The hardening process of rolling strengthens the thread profile, rather than disrupt its natural integrity by cutting into it, as illustrated in the diagram below.

Thread rolling uses hardened steel cylindrical dies to shape ductile metals. The dies, imprinted with the thread profile, penetrate the work metal at ultra-high pressures to displace and mold it into a mirror image thread. This process also differs from traditional cutting and grinding methods because no metal is lost or cut away; it’s simply re-shaped.

But there are a number of other reasons to choose thread rolling over thread cutting. As the industry leader in thread rolling solutions for over 60 years, we’ve seen manufacturers benefit in various ways — but the strongest advantage we’ve seen involves cost.

The No. 1 Thread Rolling Advantage 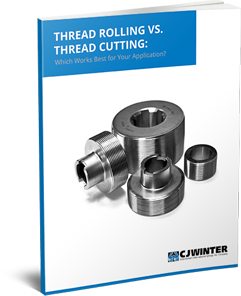 While the various cost savings are the biggest differentiators between the two methods, there is a host of other benefits of thread rolling. The simple tooling, repeatable process, and easy cleanup result in shorter labor times and faster turnaround between jobs, which significantly shortens the overall lead time.

Thread rolling improves metal tensile strength by 30% or more and fatigue strength by between 50-75% due to the hardening the material undergoes during the rolling process. Additionally, the geometry of the roller dies produces a more accurate thread form, while the intense pressure leaves a much smoother surface compared to those of cut threads.

To learn the additional advantages that the thread rolling process supports, download our new eBook, Thread Rolling vs. Thread Cutting: Which Works Best for Your Application?